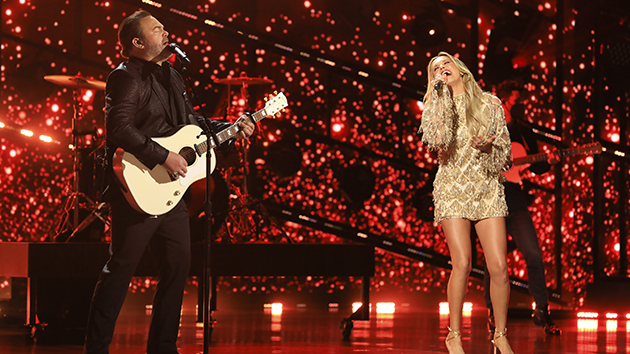 Carly Pearce walked away a double winner at the 2021 ACM Awards, and she couldn’t be more grateful.

Carly and Lee Brice went in to Sunday night’s ceremony as winners, having already picked up a trophy for Music Event of the Year for their hit duet, “I Hope You’re Happy Now,” which they also performed during the show.  The pair received another surprise during the broadcast when the track was named Single of the Year.

Pearce became emotional during their acceptance speech onstage at the Grand Ole Opry and continued to express her gratitude after the show, sharing on Instagram, “You have made my country music dreams come true with this little apology I wrote to an ex. And now it’s the ACM SINGLE AND MUSIC EVENT OF THE YEAR! Y’all I’m seriously at a loss for words.”

“The biggest thing I’ve learned this year is the true power of unwavering, blind faith. Thank you God for redeeming my story & continuing to show me that you work all things together for GOOD. I’m so unbelievably touched, y’all,” Carly continued in a tweet Monday morning.

This marks two ACM wins for Carly and Lee’s fifth overall. He also took home the award for Single of the Year in 2015 for “I Don’t Dance.”

Just in time for Mother’s Day, Chris Lane offers an emotional tribute with “That’s What Mamas Are For”