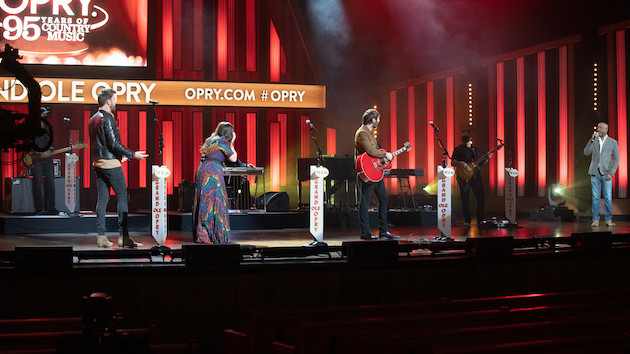 Lady A just joined the Grand Ole Opry!  The surprise announcement was made Thursday, January 21.

The “Need You Now” singers — comprised of members Hillary Scott, Charles Kelley and Dave Haywood — learned of their nomination while taping their performance for the Grand Ole Opry: 95 Years of Country Music celebration, which airs February 14 on NBC.

The Grand Ole Opry announced the good news via Twitter, saying current Opry member Darius Rucker was the one to extend the exclusive invitation.

In a teaser clip of the group’s induction, Rucker introduces Lady A by praising their extensive accomplishments that decorate their nearly 15-year history.

“This trio are multi-platinum superstars. Seven time Grammy Award-winners… seven time CMA winners, too!  And I feel so, so honored right now to stand here in the Opry house and hope they accept the invitation I’m thrilled to be offering them right now,” Rucker smiles.  “So, Lady A, would you like to be the newest members of the Grand Ole Opry?”

The trio initially react in disbelief before becoming overwhelmed by excitement.  Scott then bursts out in tears, eliciting jokes that the announcement should have been saved for after their performance.

The Grand Ole Opry announced in a followup tweet that Lady A’s membership is “effective immediately.”

Becoming an Opry member is considered one of country music’s highest honors.

“There’s no magic formula and no secret code that grants access to one of the most coveted invitations in all of music. The path to an Opry membership may be in the hands of management, but its members guarantee the Grand Ole Opry’s future,” the nearly 100-year-old institution says on its about page.

She “Never Wanted to Be That Girl”: Carly Pearce says “Don’t steal from my hometown”