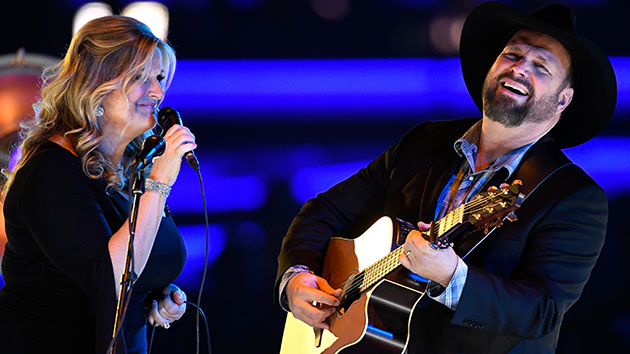 Earlier this week, Kelly Clarkson revealed to Garth Brooks on her daytime talk show that his song, “The Dance,” helped her come to terms with her divorce.  The song also inspired Clarkson to put pen to paper and pour her emotions into a “therapeutic” new single.

Speaking with Entertainment Tonight, Brooks, 58, and wife Trisha Yearwood, 56, said they were stunned and touched by Clarkson’s honest confession.

Referring to the “Piece By Piece” singer as “Kelly ‘fricken’ Clarkson,” the two-time Grammy winner gushed, “The fact that she says it as a fan makes you feel as an artist like, ‘Hey, maybe you’re down here doing what you’re supposed to be doing down here."”

Yearwood called the exchange a “testament to the power of music.”

“Songs mean different things to all of us depending on what we’re going through. So that song, ‘The Dance,’ is probably the song that is most played at people’s weddings and funerals,” the Trisha’s Southern Kitchen star continued. “Then when Kelly’s going through divorce, it’s like …everybody has their own story and that’s the cool thing about music is that you can find a way for it to fit into your own story.”

“The Dance,” which came out in 1989, is about being thankful for an experience, even if it’s painful.

Clarkson, 38, said on Monday that the song perfectly sums up her feelings about the divorce from husband Brandon Blackstock.

She also revealed her new song includes the lines, “Even though my heart is broken/ It was worth the dance anyway.”