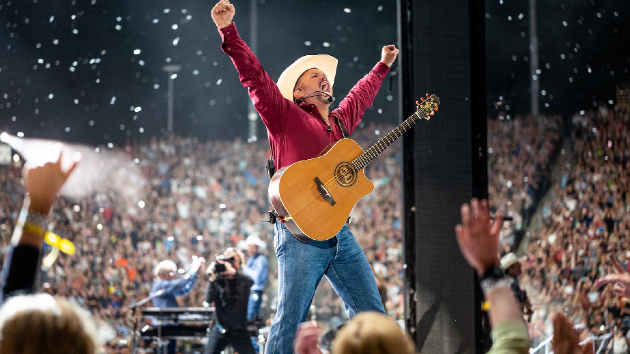 On Wednesday, Garth Brooks will perform alongside Lady Gaga and Jennifer Lopez, at the inauguration of President-elect Joe Biden at the U.S. Capitol in Washington, D.C.

The seven-time CMA Entertainer of the Year made the announcement during a news conference on Monday, after taking the weekend to consider the possibility after “a very sweet ask” during a phone call with future First Lady Dr. Jill Biden.

The Oklahoma native has performed for every U.S. President since his close friend, Jimmy Carter, with the exception of Ronald Reagan.

Garth also revealed he’d been asked to sing at the 2016 inauguration of President Donald Trump as well, though he “couldn’t fulfill that one because we had already had dates in Cincinnati set there.”

Garth didn’t unveil what he plans to perform, but did confirm it likely won’t be his classic, “We Shall Be Free,” since he previously sang it at President Barack Obama‘s inaugural.

While seeming to indicate his own political persuasion, Garth went on to make it clear that he and the Biden administration share a common goal.

“I might be the only Republican at this place, but it’s reaching across, loving one another, because that’s what’s going to get us through probably the most divided times that we have [ever had],” he reflected. “I want the divided times to be behind us.”

“I want to be able to differ in opinion and hug each other at the same football game. Right?” he asked.

ABC’s Inauguration Day coverage is set to kick off at 7 a.m. ET on Wednesday, with the ceremony itself slated to begin at noon.