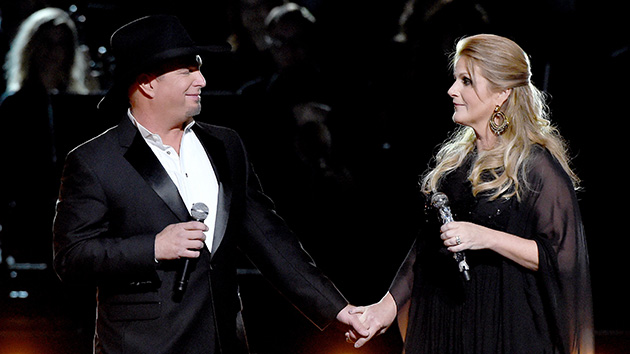 Garth Brooks is one of the best-selling artists of all time, but he knows who the real star is when it comes to his and wife Trisha Yearwood‘s version of the number-one pop hit “Shallow.”

The couple sent a buzz of excitement through their fanbases when they announced they were recording a studio version of the Academy Award-winning song by Bradley Cooper and Lady Gaga, after they’d performed an acoustic version during their CBS special last spring.

The enthusiasm for the couple’s rendition has yet to dissipate, with fans making it a point to tell the CMA Entertainer of the Year how awed they are by Trisha’s voice.

“In my world, you get used to this right here: ‘Hey man, Garth, I love you, but…’ And you know it’s coming, and that’s what I’ve heard about ‘Shallow,’” notes the superstar singer. “‘Hey, Garth, big fan, love your stuff, but, come on man, the queen, she’s singing her a** off!’”

“Well, she always does,” Garth says of Trisha. “But this was one of those things where she really got to show everybody second or third gear.”

Garth and Trisha’s version of “Shallow” is included on Garth’s latest album, FUN.

Kacey Musgraves’ ‘star-crossed’ debuts at #3 on the ‘Billboard’ 200