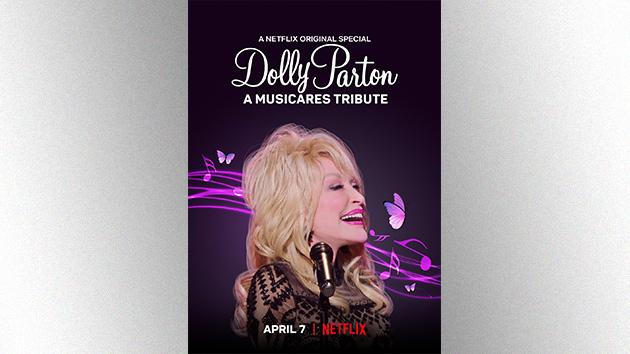 Each non-pandemic year, MusiCares, the charitable arm of the Recording Academy, stages a star-studded benefit gala that pays tribute to a top musical artist named Person of the Year.  These are invite-only events that the public never sees, and they’ve very rarely been released after the fact.  But Netflix is about to change all that with Dolly Parton: A MusiCares Tribute.

In 2019, MusiCares named Dolly Parton its Person of the Year with the traditional gala, which featured stars from many different genres all singing Dolly’s famous songs including Kacey Musgraves, Chris Stapleton, Willie Nelson, Garth Brooks and Trisha Yearwood, and many more.

Hosted by Little Big Town, the show sees Kacey and Katy Perry teaming up on “Here You Come Again,” Garth and Trisha singing “Old Flames Can’t Hold a Candle to You” and Mavis Staples, Leon Bridges and Jon Batiste performing “Not Enough.”

Additionally, Chris lends his voice to “9 to 5,” while Dolly’s goddaughter, Miley Cyrus, joins forces with Shawn Mendes and Mark Ronson on Dolly’s classic duet with Kenny Rogers, “Islands in the Stream,” and Yolanda Adams offers a powerful rendition of “I Will Always Love You.” Dolly herself takes the stage with Linda Perry to deliver “Coat of Many Colors.”

“I am so happy that Netflix is going to be showing the MusiCares tribute to me. MusiCares has done so much for the people in this industry and continues to be a beacon of light for those in need,” Dolly says in a statement. “It was such a joy and a humbling experience to be able to sit and watch all of the great artists singing songs that I had written or had been a part of.”

Dolly Parton: A MusiCares Tribute premieres on Netflix on April 7.