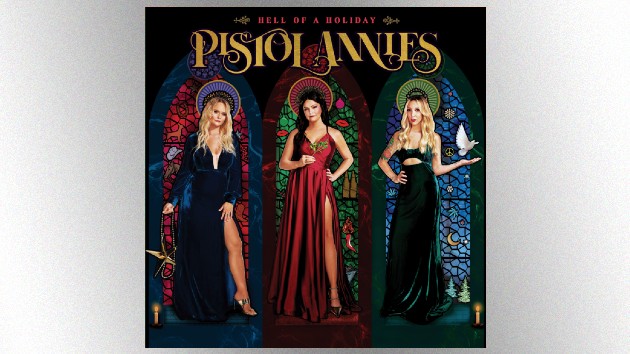 A new album is coming from Pistol Annies, this time a Christmas one.

The trio, made up of Miranda Lambert, Ashley Monroe and Angaleena Presley, announced that their Hell of a Holiday album will be out on October 22. The 13-track record includes both original and cover songs, including “Auld Lang Syne,” “Make You Blue” and the title track.

Pistol Annies teased the news earlier in the week. “We’ve been thinking about…finally sharing the news we’ve been holding onto for months early tomorrow morning,” the group posted on social media Wednesday. “Whew we’ve had a hell of a time holding this one in.”

Fans who pre-order Hell of a Holiday will receive “Snow Globe” from the project, out at midnight tonight. The record, which will also be available on vinyl, will be released on October 22.

This is the Pistol Annies’ fourth studio album. They previously released Hell on Heels in 2011, followed by Annie Up in 2013 and Interstate Gospel in 2018.

Russell Dickerson and his wife, Kailey, put up their Christmas tree extra early — but they’ve got a good reason