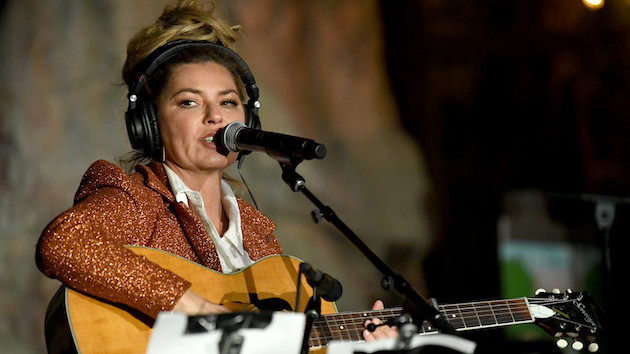 In the latest episode of her Home Now Radio show on Apple Music, Shania Twain takes a walk down memory lane of her Las Vegas residencies, sharing some of the most memorable highlights and stunning shows she saw by other resident artists.

“During my first Las Vegas residency at Caesers Palace, I saw all of the other artists that were playing in circulation in the same room with me,” Shania recalls, explaining that Elton John and Rod Stewart were two of the other performing acts during that time.

There’s never been any shortage of talent on the Vegas stage. Shania remembers pop superstar Cher as “the real deal,” raves that Justin Timberlake’s residency was “one of the most musically supreme shows that I’ve seen live in Las Vegas,” and describes Ariana Grande as “the voice of today.”

But as for who the ultimate residency legend of Vegas is? Shania says she reserves that distinction for a classic talent.

“I would say that the most iconic resident artist in Las Vegas is Celine Dion, by far,” the singer says. “I’ve seen Celine Dion many, many times in Las Vegas at Caesars Palace and she’s always incredible, funny, fun and sings like the superstar that she is.”

Prior to the COVID-19 pandemic, Shania had planned to spend much of 2020 on stage in Vegas. Her Let’s Go! Las Vegas Residency had to be cancelled during the shutdown.

I'm excited to share the latest episode of #HomeNowRadio with you because It's all about my second home, which I'm missing SO much… Las Vegas! ❤️ Listen now, only on @applemusic: https://t.co/uLobpAwaFq pic.twitter.com/fyltG1gYQj

Garth’s taking care of Trisha as she battles COVID-19