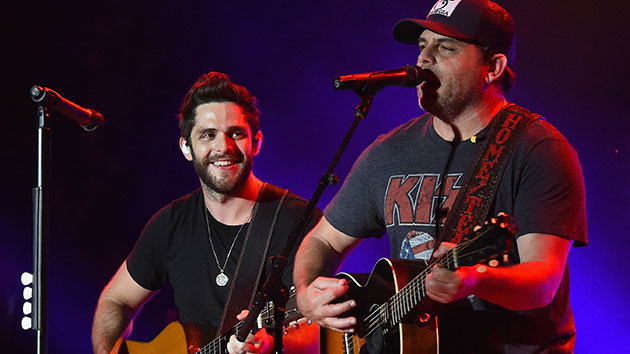 Thomas Rhett namechecks one of the biggest hits by his dad, singer/songwriter Rhett Akins, in his latest top-twenty hit, “What’s Your Country Song.”

While the two are both co-writers on the tune, it was TR’s idea to include the shout-out to 1995’s “That Ain’t My Truck.”

“Well, it actually started as a joke,” TR tells ABC Audio. “We were in a hotel room in Dallas writing the song, and we had already finished the chorus and had nowhere to go in the verses.”

“And I just started saying old country song titles that kind of told a story,” he continues, “and Dad’s happened to be the first one that I said. And we all laughed about it, and then it kind of turned into what the whole verse vibe became.”

By the time they finished, they’d mentioned more than a dozen country classics, by everyone from Hank Williams, Jr. to Garth Brooks to Barbara Mandrell.

“We just kind of took a bunch of amazing songs from our past and tried to write a story with song titles, and then the chorus hits,” TR explains. “So it was a really unique, fun way to write a song.  And I’m really glad to kind of give my dad some some props and credit in that song.”

“That Ain’t My Truck” isn’t Rhett Akins biggest hit, as it turns out. That distinction belongs to “Don’t Get Me Started,” which topped the chart back in 1996.