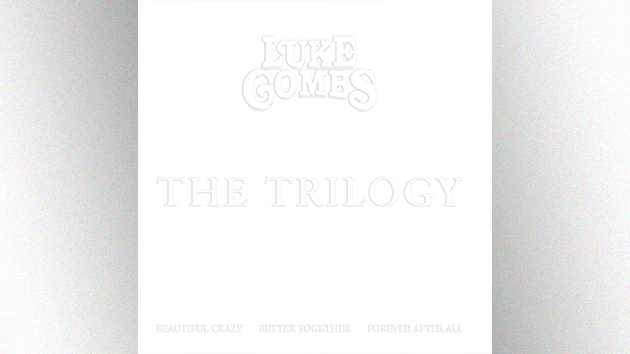 As Luke Combs continues to set chart records, he’s releasing a vinyl album featuring some of his biggest hits.

Luke’s latest #1 hit, “Forever After All,” makes him the first artist to have 11 consecutive #1 singles on the Billboard Country Airplay chart, in addition to it being his 10th single to spend multiple weeks at the top of the chart. The romantic song also arrived at #2 on the Billboard Hot 100, marking the highest debut on the all-genre chart for a male solo country artist.

To celebrate these achievements, the country superstar is releasing The Trilogy, a vinyl album featuring three of his hit songs chronicling his relationship with his wife, Nicole: “Beautiful Crazy,” “Better Together” and “Forever After All.”

“These 3 songs mean a lot to @nicolecombs and I for a lot of reasons, so I wanted to put them on something together,” Luke shares on Twitter. “Considering the ‘like a needle in a groove’ & ‘a needle drop on a 45’ lyrics, I figured it was only fitting to put them on a vinyl.

The Trilogy drops on July 16. It’s available for pre-order now.

Jimmie Allen shares the sex of baby number three, plus a name idea that his wife “ain’t lettin’…happen”

Gary LeVox shares the epic music video for “We Got Fight,” from the movie ‘The Ice Road’