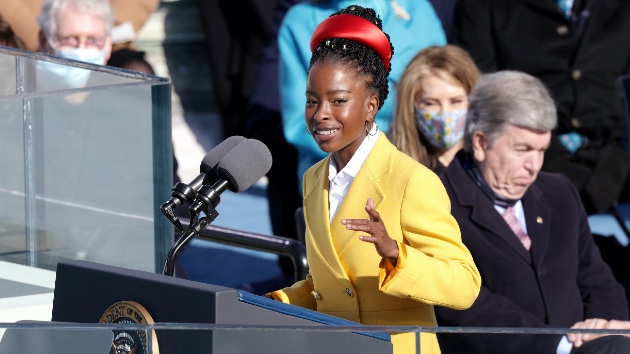 Amanda Gorman, at 23 years old the youngest poet in recent history to be a part of a presidential inauguration and the first national youth poet laureate, read her poem “The Hill We Climb,” following President Joe Biden’s inaugural address Wednesday.

Gorman, 22, opened her poem by saying, “We braved the belly of the beast,” then went on to deliver a powerful message of hope, unity and truth.

“We’ve seen a force that would shatter our nation rather than share it, would destroy our country if it meant delaying democracy,” she recited. “And this effort very nearly succeeded. But while democracy can be periodically delayed, it can never be permanently defeated.”

“In this truth, in this faith, we trust,” she read. “For while we have our eyes on the future, history has its eyes on us.”

Gorman previously told NPR that she finished writing the poem just after rioters stormed the Capitol on January 6.  She follows in the footsteps of esteemed poets like Maya Angelou and Robert Frost in reading a poem at a presidential inauguration.

Gorman also delivered her poem at a historic inauguration that saw Kamala Harris sworn in as the country’s first woman vice president and first woman of color to serve in that position.

Loni Love weighs in on the B. Simone, DaniLeigh ‘Wild ‘N Out’ situation