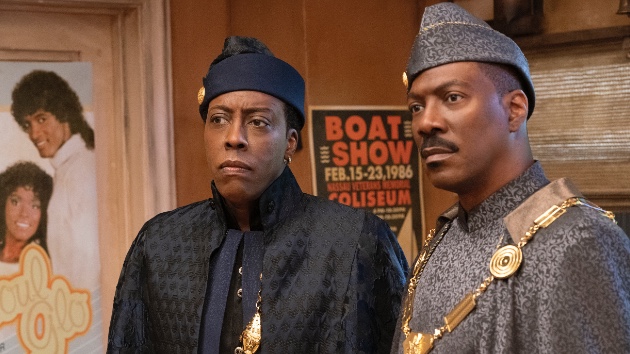 We’re finally getting a first look at the highly anticipated Coming to America sequel, Coming 2 America.

In one of the newly released images, Eddie Murphy, who returns as Akeem Joffer, the crown prince of Zamunda, and Arsenio Hall, who stars as his trusty sidekick Semi, are seen dressed in their regal attire.

In an interview with People, James Earl Jones, who plays the beloved King Jaffe Joffer, says he’s excited to once again take on his role from the much-beloved original film.

“Of the countless characters I’ve portrayed, King Jaffe Joffer remains one of the most enjoyable and iconic characters I’ve had the pleasure of playing,” he says. “With his regal and commanding presence as the ruler of Zamunda, I reveled at bringing his presence to life for Coming to America in 1988. And now, over 30 years later, I am honored to reprise my role once again in the sequel, Coming 2 America.”

As previously reported, Coming 2 America, which was set to have a theatrical release in 2020, will now arrive March 5, 2021 on Amazon Prime Video. In addition to Murphy, Hall and Jones, the film brings back other original cast members including Vanessa Bell Calloway, Shari Headley and Paul Bates. New additions include Wesley Snipes, Leslie Jones, Teyana Taylor, Tracy Morgan, Luenell, Jermaine Fowler, KiKi Layne, and Rick Ross, among others.

Like the first film, the sequel will have Murphy’s Akeem travel to America with Semi. However, this time around, Akeem, who is set to become king, goes to America in search of a long-lost son who could be his heir to the throne of Zamunda.

Emmys 2021: RuPaul is most awarded person of color with historic 11th Emmy win