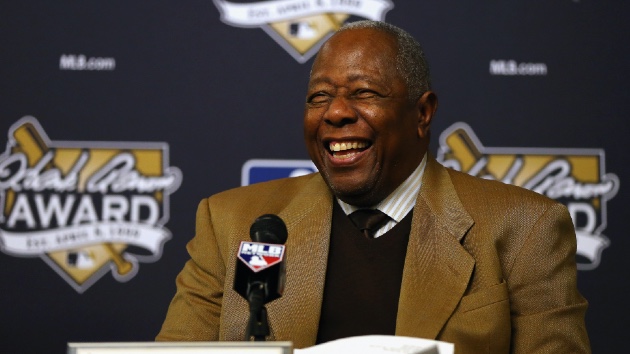 Baseball icon and Hall of Famer Hank Aaron passed away at 86 years old on Friday.

Born Henry Louis Aaron, the retired right fielder from Mobile, Alabama, was known as one of the greatest power hitters in Major League Baseball history, a talent that earned him the nickname “Hammerin’ Hank.”

“Mr. Aaron passed away peacefully in his sleep. The family asks for privacy at this time. The Braves will be releasing a statement shortly,” Aaron’s assistant said in a statement to ABC News.

Aaron led the league with a record 755 home runs in his illustrious career when he eclipsed Babe Ruth‘s total in 1974 at age 23. He held that record until 2007, when the number was surpassed by San Francisco Giant Barry Bonds.

On May 17, 1970, Aaron became the ninth player in MLB history to add his name to the exclusive 3,000 hits club. The right fielder hit a single off a pitch from Cincinnati Reds pitcher Wayne Simpson at Crosley Field.

After retiring from the batters box, “The Home Run King” became the senior vice president of the Atlanta Braves in 1976.

Aaron’s legacy stretched far beyond fair territory on the field, he also led the way for other Black players in the sport, as well as Black Americans in general.  Earlier this month, Aaron got vaccinated against COVID-19 in Georgia, in hopes that doing so would send a message to other Black Americans that the shots are safe, ESPN reported.