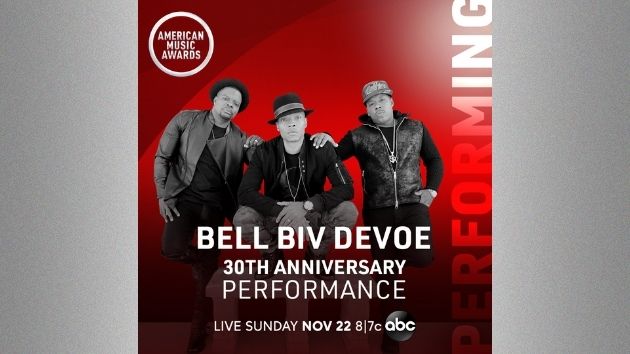 Courtesy of AMAs and ABC

The American Music Awards will be welcoming a top tier acts set to shake up their stage on November 22. It was revealed on Monday’s Dancing with the Stars that Grammy Award-winning rapper Nelly will team with Bell Biv DeVoe for one unforgettable performance.

The multiplatinum selling group, who made their debut on the AMAs nearly 30 years ago, will perform a medley of their unforgettable hits, such as “Poison” and “Do Me.”

Bell Biv DeVoe, which is comprised of Ricky Bell, Michael Bivins and Ronnie DeVoe, first performed on the AMA stage in 1991 to support their debut studio album, Poison.

As for Nelly, a double diamond-selling hitmaker who has three AMA awards in his trophy case, he will also take fans back in time by revisiting the singles that defined his career — “Country Grammar,” “E.I.” and “Ride Wit Me.”

Nelly collected his first award in 2002 for Favorite Rap/Hip-Hop Artist and, a year later, picked up the trophy for Fan’s Choice Award.  He most recently took home Single of the Year for “Cruise,” his 2013 collaboration with Florida Georgia Line.

Joining Nelly and the “B.B.D” bangers for a riveting night of performances will be an array of top music talent, such as BTS, Dua Lipa, Shawn Mendes, Katy Perry, Jennifer Lopez, Bad Bunny, Megan Thee Stallion, Lil Baby and Maluma.

The American Music Awards, the world’s largest fan-voted awards show, will broadcast live from The Microsoft Theater in Los Angeles on Sunday, November 22, at 8 p.m. ET on ABC.