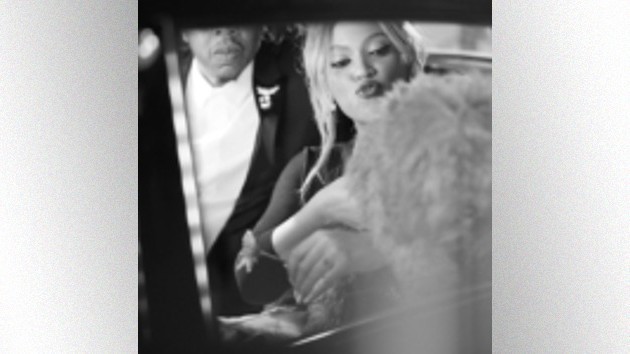 Beyoncé and JAY-Z are continuing their Tiffany’s ABOUT LOVE campaign starring in a new short film, titled, “Date Night” featuring a cameo appearance by their nine-year-old daughter, Blue Ivy.

Inspired by the New York City backseat taxi scenes from the 1961 film Breakfast at Tiffany’s, the video begins with Queen Bey sitting in the back of a Rolls Royce, wearing an Ailsa diamond ring of over 10 carats, as well as a pair of Ribbon Fan earrings featuring diamonds of over six carats. Her husband joins her, wearing the Bird on a Rock brooch with a platinum and 18k gold bird perched on a morganite gemstone of over 44 carats.

After eating pizza in the car, a bottle of Armand de Brignac — the brand JAY owns — is delivered to them. They sip champagne, and Beyoncé holds a yellow daisy in her hand, playing a game of “he loves me, he loves me not.” Jay ends the game, saying, “He loves you,” and the video ends with their passionate kiss.

As a part of the ABOUT LOVE campaign, Tiffany has partnered with Beyoncé’s BeyGOOD Foundation, and JAY-Z’s Shawn Carter Foundation, to create the Tiffany & Co. ABOUT LOVE Scholarship Program. Tiffany & Co. pledged $2 million in scholarship funding for students in the arts and creative fields at Historically Black Colleges and Universities (HBCUs).

The late Michael K. Williams remembered on his birthday, Porsha Williams reveals she was involved with R. Kelly, and more