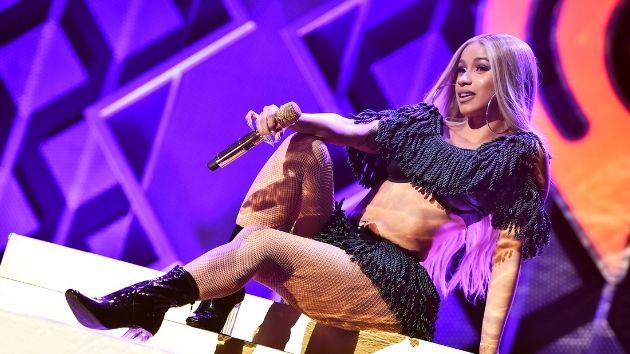 Cardi B is saying What’s “Up” to 2021 with a hot new single and music video to match.

The Grammy Award-winning rapper dropped “Up” Friday, and the music video begins with a proper send off to the previous year.

The visual starts off with Cardi standing on a man lying on a gravestone while digging her stiletto between his legs.  A quick flash to the headstone, which reads “RIP 2020,” Cardi kicks off the new year with a music video that could make “WAP” blush — with girls kissing and Cardi flaunting her hourglass figure.

The anthem is about Cardi knowing her worth and weaponizing it to put people in their place.

The aggressive rap features lyrics “Big bag bussin’ out the Bentley Bentayga/ Man, Balenciaga Bardi back and all these b****es f***ed” and, in the pre chorus, “I said my face bomb, a** tight/ Racks stack up Shaq height/ Jewelry on me, flashlight/ I been lit since last night.”

Cardi also chatted about her new single with Apple Music’s Zane Lowe on Thursday, and said she wanted her new music to be a departure from what her fans have come to expect.

“My last song was very sexual, very sexual,” she said. “So I always want my next songs to be different than the one before.”

As for when she’ll drop a new album, the rapper noted, “I have recorded so many songs. I think I’ve got like 50 songs recorded, and I’m just still not satisfied.  If I’m not satisfied, I’m just not satisfied.”

However, she added, “I really want to put out an album this year. I feel like I have no choice now. Now, I feel like I exceeded my limit of holding. I just need to stop with the fear.”