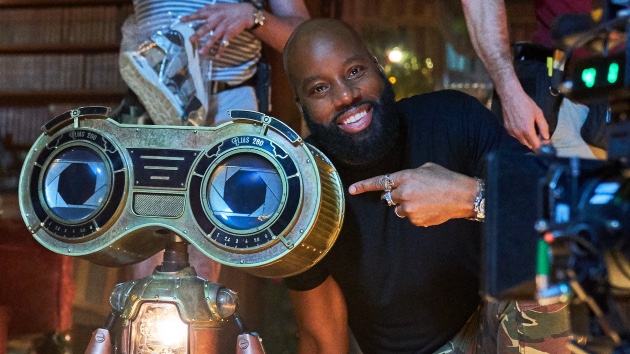 When David E. Talbert was younger, he — like most Americans — watched Christmas movies with his family.  However, one thing was absent from those films celebrating the magic of Christmas… people that looked like him.

That discovery led to him writing and directing Jingle Jangle: A Christmas Journey.  The film, available now on Netflix, is led by cast that’s completely made up of people of color.

Talbert told ABC Audio that he brought up his childhood experience when pitching his movie to the streaming giant.

“I said, ‘But the holiday movie you have all white people falling in love or being whimsy and wonderful. And that’s a beautiful thing,"” he recalled telling studio executives. “‘But you don’t have black people and people of color love the holidays just like everybody else. And what do we have to sit down with and watch every year?"”

The answer, he says, was “nothing.”

Talbert adds that making more holiday films — or movies in general — starring families of color is long overdue.  That realization hit the 54-year-old hard when he tried to share his favorite childhood movie, Chitty Chitty Bang Bang, with his son.

Instead of having a father-son bonding movement, his son, Elias, lost interest because “there was no representation of himself on screen.”  That inspired Talbert to take a closer look at what his son DID like.

Elias loved the animated film Spider-Man: Into the Spider-Verse because, as Talbert says, the movie’s lead, “Miles [Morales] looks like him, haircut’s like him [and has] swag like him.”

That’s why he hopes that, by watching Jingle Jangle: A Christmas Journey, people realize some very important things.

“We’re all magical. That the world is an inclusive place,” he expressed. “We all have a seat at the table of Wonder and Magic.”

Venus and Serena Williams cover ‘Harper’s Bazaar’; Jamie Foxx becomes a dog in his next film; and more

“It’s fixed”: Tonight’s Verzuz will be free after all, says Swizz Beatz