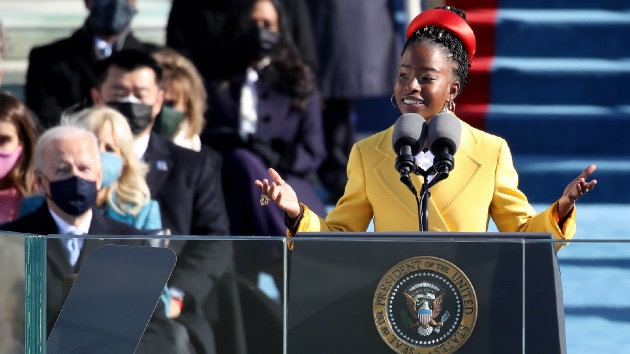 Amanda Gorman, the poet who captivated the country’s attention at the 2021 inauguration of PresidentJoe Biden and Vice President Kamala Harris, is set to join Super Bowl LV’s iconic halftime show.

On Wednesday, Good Morning America confirmed the 22-year-old will be performing in front of about 22,000 fans, as part of the pregame show next month in Tampa, Florida, alongside superstar musicians H.E.R., The Weeknd, and Jazmine Sullivan.

Gorman, who was raised by a single mom and who worked to overcome a speech impediment in her youth, was handpicked to read at the inauguration by first lady Jill Biden. She told GMA the day after the inauguration that she was “honestly shocked” at the invitation.

“I had not been expecting at 22 that they would trust me with such an honor,” she said. “I was also daunted at the same time. I was honestly scared of writing such a poem. I wasn’t sure that I could even do it justice, but I’m so glad that I put my best foot forward and did it.”

Gorman is the youngest poet to read at a presidential inauguration. Her poem, “The Hill We Climb,” was praised on social media by thousands including Oprah Winfrey, Hillary Clinton, Michelle Obama and former president Barack Obama.

Gorman’s newfound stardom has also added another title to her resume: model. IMG Models — the same agency that represents supermodels Gigi and Bella Hadid and Ashley Graham — confirmed on Twitter they are now representing Gorman. Further details on partnerships or deals for the Harvard graduate have yet to be released.

Halle Bailey hits back at fan who shaded sister, Chloe Bailey: “Be blessed”