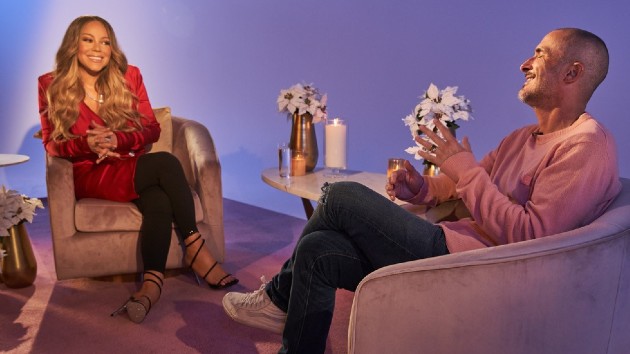 Last year, Mariah Carey‘s 1994 classic “All I Want for Christmas Is You” finally hit number one, 25 years after its release.  Looks like this year, it may do it again.

The song has just jumped from #14 to number two on the Billboard Hot 100.  It’s the first time it’s been back in the top 10 since January, when it closed out its three-week run on top of the chart.  “All I Want” was the second Christmas song ever to top the Hot 100, and the first since 1958.

In a new interview with Apple Music’s Zane Lowe, Mariah says at this point, the most important thing about the song isn’t its amazing sales and chart success, but the feelings that it evokes in people, including herself.

“You know what? I’m not saying it’s the world’s greatest thing, but it makes me happy. And it’s made a lot of other people happy,” Mariah tells Zane. “And when I see people dancing in the streets to the song and having these big, huge festivals, and they’re playing it, it’s what holidays mean to me.”

“It’s the memories,” she notes. “It’s being around the people. It’s the song that takes you through the memories that you can create your own new memories from.”

“I have so many memories attached to the song, but people come to me and tell me about their memories,” Mariah  concludes. “And that’s what means the most.”