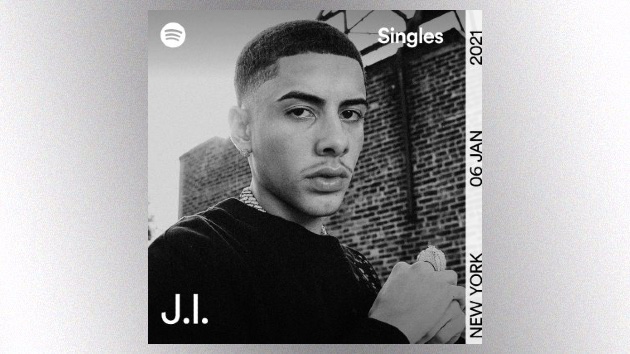 For his first effort in 2021, Brooklyn rapper J.I. returns with an acoustic version of hit single, “Letter 2 U,” and a cover of Drake‘s classic hit “Marvin’s Room.”

The self-proclaimed Prince of New York is one of the latest artists to cover a track from Drake’s album, Take Care. He said it only made sense to cover a “prolific” artist for Spotify Singles.

“The reasons why I picked these tracks are because ‘Letter 2 U’ was the first single off HLK V.3 and was very well received,” J.I. says in a statement. “I picked to cover Drake because he is a prolific staple for Generation Z. ‘Marvin’s Room’ is a vibe so recreating this song made sense.”

“Letter 2 U” was featured on J.I.’s most recent project, Hood Life Krisis Vol. 3. Released in December, the seven-track effort features his “R&B S***” collaboration with A Boogie Wit Da Hoodie, as well as his Reggaetón single, “Suficiente.”

At 19 years old, J.I. has become a force to be reckoned with between melodic songs like “Proud of Me” and anthems like “Need Me,” which landed a spot on The New York Times’ Best Songs of 2020 Playlist. He was also named one of Rolling Stone’s Biggest Breakthrough Artists of 2020.

To date, there have been over 300 singles recorded as part of the Spotify Singles series, which was created to give artists an opportunity to record new versions of their own songs, and the songs of the artists they love.

Kodak Black claps back at rumors he’s a clone, “You can’t duplicate this”