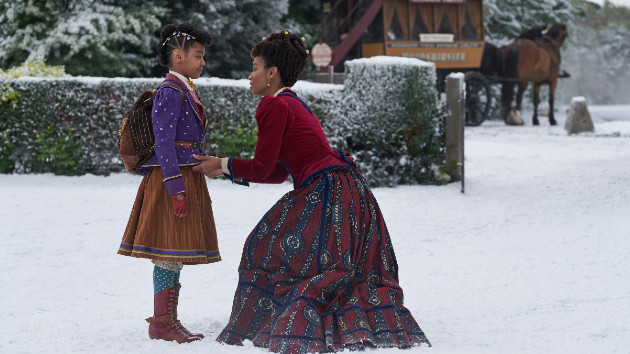 Rose, who plays Jessica Jangle — the daughter of Jeronicus, a once respected inventor — tells ABC Audio that she fell in the love with the imaginative feature because it connected with her inner child.

“I am interested, as somebody who is a big kid, in movies that are written with the child in mind,” she says. “That invite you in and invite the child in you that never went away to be a part of it. And I think that’s what this film has done.”

Rose also applauds the film’s “values” which include “the love of family,” noting that it’s what she believes “Christmas is supposed to be about.”

Yet, with all that in mind, Rose says the most “exciting” aspect of the film for her was the seeing “Black [and] brown people in Victorian dress with no hint of bondage [or] conversation about it.”

Noni believes this seeing this reality in the film was “also really important for young people,” adding that “[Black people] did not burst forth from slavery.”

Rose’s co-star Madalen agrees, adding that she could really identify with her 19th century character of Journey.

“I feel like we’re very similar,” she says. “She’s adventurous, she’s feisty, she’s a very determined little girl, and she loves everything STEM — science, technology, engineering and math — which are all of my favorite subjects in school.”