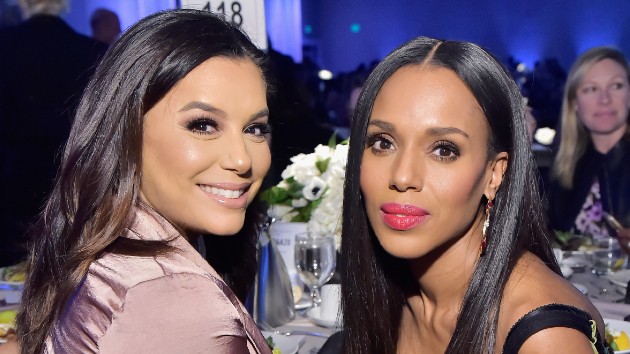 After sparking backlash for her seemingly dismissive comments about Black women, Eva Longoria not only issued an apology but a clarification of what she really meant, as well — and Kerry Washington is backing her up.

On MSNBC on Sunday, Longoria discussed the impact of Latina women voters on the 2020 presidential election and said, “The women of color showed up in big ways.”

“You saw in Georgia what Black women have done, but Latina women were the real heroines here, beating men in turnout in every state and voting Biden-Harris at an average rate of close to 3 to 1,” she continued.

Many social media users took issue with her “real heroines” comment and took it as her dismissing Black women. In response, Longoria issued an apology and explained what she truly meant when she made the statement, which Washington vouched for.

The Little Fires Everywhere actress retweeted Longoria’s note and added, “I know Eva like a sister. We have been in many trenches together. She is a fighter for all women. Read below. This is what she meant. This is how she truly feels.”

In her apology, the former Desperate Housewives star wrote, “I’m so sorry and sad to hear that my comments on MSNBC could be perceived as taking credit from Black women.”

“When I said that Latinas were heroines in this election, I simply meant that they turned out in greater numbers and voted more progressively than LATINO MEN” she clarified. “My wording was not clear and I deeply regret that.”

Longoria went on to acknowledge the history of anti-Blackness within the community and said she “would never want to contribute to that” before doubling down on her support of Black women.

“Nothing but love and support for Black women everywhere,” she concluded.

Tia Mowry encourages all women to take control of their health

Coi Leray opens up about the success of her single, “No More Parties”

Coi Leray opens up about the success of her single, “No More Panties”