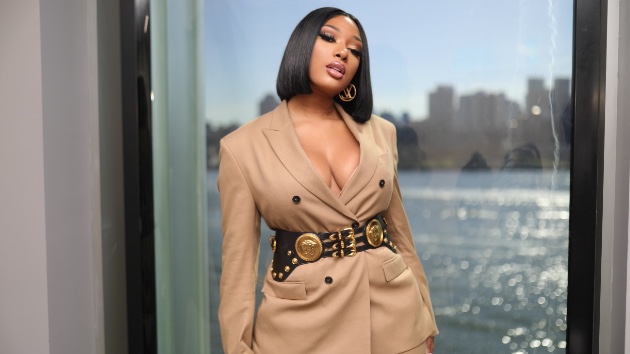 Megan Thee Stallion is giving all the hotties on Instagram ideas for their Halloween house party this weekend.

On Wednesday night, the hot girl coach shared a collage of photos of herself dressed as her favorite character, Yumeko, from Netflix’s anime series, Kakegurui — about an elite school where students are assessed based on their gambling skills rather than grades.

In the photos, Megan rocked a skintight long-sleeve black dress embroidered with a red dragon design.

Megan got all dolled up with cat-eye makeup, deep red lipstick, and a black and red wig with bangs like the show’s character.

“It was the me for him” Megan wrote in the caption of a second photo collage, quoting lyrics from her hot new freestyle, in which she also gave a shoutout to Kerry Washington‘s Emmy-winning role on ABC’s Scandal.

“Damn I must be Olivia Pope cuz y’all keep putting me in all these scandals,” Megan raps.

Hotties get ready, the “Don’t Stop” rapper is working on her forthcoming debut album.

“Trying to pick the songs I think my hotties will like the most for my ALBUM,” Megan captioned a seriesof photos of herself in the studio. One photo featured a white board with 19 yellow sticky notes, which could be the amount of songs featured on Megan’s official debut.