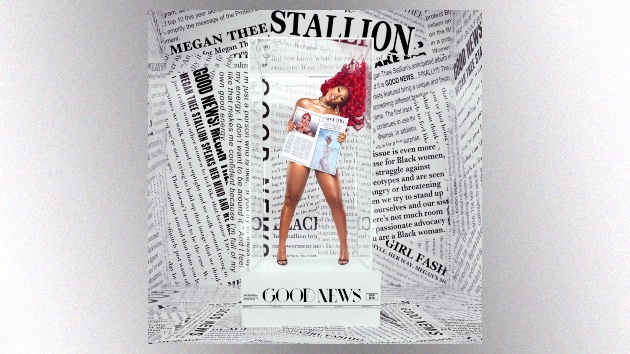 On Friday, the “Savage” rapper shared the exciting news with her 19.6 million Instagram followers.

“GOOD NEWS IS ALREADY OFFICIALLY GOLD HOTTIES. This is the fastest y’all ever ran it up lol I love all of y’all and we gone keep going up. REAL HOT GIRL [ish],” wrote Megan in the caption.

“The haters can’t stop what’s meant for you Meg,” wrote one fan in the post’s comments. “So proud of you. platinum next !!! Make sure you drop a video or movie,” wrote another.

In the last few months, Megan has released music videos for “Body,” Don’t Stop,” and an animated visual for “Savage.” Fans are hoping her next Good News video will be for her latest DaBaby-assisted single, “CryBaby.”

Earlier this month, one of Megan’s many fan pages shared a teaser video on Instagram, which shows Megan wearing a green latex suit. The video appears to be taken on the set of the song’s music video, with Megan doing the Crybaby dance on the floor, while her frequent collaborator DaBaby watches nearby.

Good News marks Megan’s second RIAA Gold album, following 2019’s Fever. The Hot Girl coach also landed two RIAA Gold-certified singles, “Girls in the Hood” and “Sex Talk,” from her Good News debut. It was released last November after a legal dispute with her label 1501 Certified Entertainment over her contract and the release of new music.