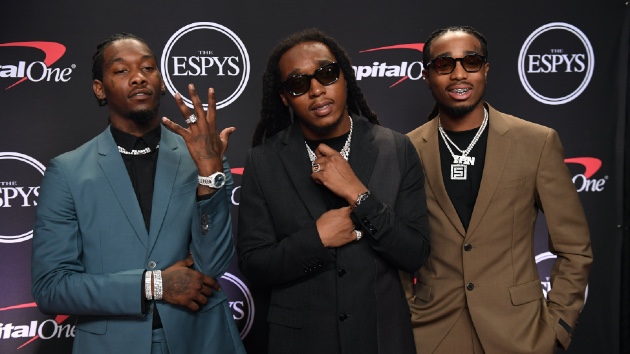 Rappers Quavo, Offset and Takeoff are ready to “take em back to the day to day @migos lifestyle” with the upcoming release of their album, Culture III: The Next Chapter.

On Thursday, Migos released the album’s trailer on Instagram, which gives us a behind-the-scenes look at the trio in the studio at their compound in Los Angeles, and other clips including Offset’s wife, Cardi B, and Quavo’s boo, Saweetie.

“We just been having time to bond with each other and spend time with each other because our solo careers been allowing us to do different things. We growing,” says Quavo in the video. “We just young men trying to grow and right now we at a pointing out life where [are] allowed to sit down and get that so we can build from scratch all over again.”

“It’s time to bust they a**,” added Offset, who said he recently learned to “step out of the box and see more of the world.”

Offset said he was inspired over the last year due to the protests against police brutality that emerged prior to the tumultuous 2020 election, which marked his first time voting.  “I trying to create great things for the world but I wasn’t really necessarily looking into the world,” says the 29-year-old.

A release date for Culture III: The Next Chapter has yet to be revealed but fans are all fired up, posting dozens of fire emojis in the comments on Instagram.

“Finally,” wrote one fan, while another said “this [album] gon be hard.”

Take Em Back To The Day To Day @migos Lifestyle
Take This Journey With Us!
The Album Is Coming. pic.twitter.com/5g65La7WqC