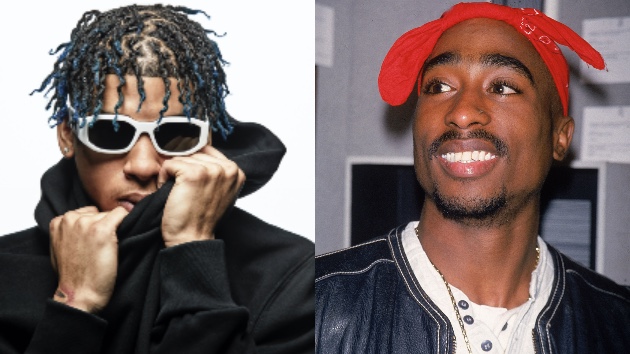 NLE Choppa is not shy about his appreciation for the late rap legend, Tupac.

“Death Is Not The Greatest Loss In Life. The Greatest Loss Is What Dies Inside While Alive. Never Surrender -Tupac Amaru Shakur,” wrote NLE Choppa on Instagram, before adding his own quote. “Hoping Love Approaches Now And Not When The Person Dies -NLE.”

Choppa shared a series of photos of himself wearing a purple Karl Kani hoodie, with his hands inside his pants the same way Tupac stood during his shoot in the 1990s.

According to NLE’s stylist Sankara Xasha Turé on Instagram, the hoodie is the exact same hoodie Pac wore. In another photo, Choppa posed against a white brick wall, with a chain hanging over the top of the hoodie, a white-and-black stripped beanie and denim overalls that read, “Thug Life,” a nod to Tupac’s memorable stomach tattoo.

NLE Choppa has been rather quiet lately other than his guest appearance on “Part of The Game” — the theme song to 50 Cent’s new Starz series, Power Book III: Raising Kanan. Last August, Choppa released his debut album, Top Shotta, which landed at #10 on the all-genre Billboard 200 albums chart. He followed up with his  project, From Light to Dark, which was released on his 18th birthday in November.

NLE Choppa, Moneybagg Yo, Gunna and more host toy drives in their hometown