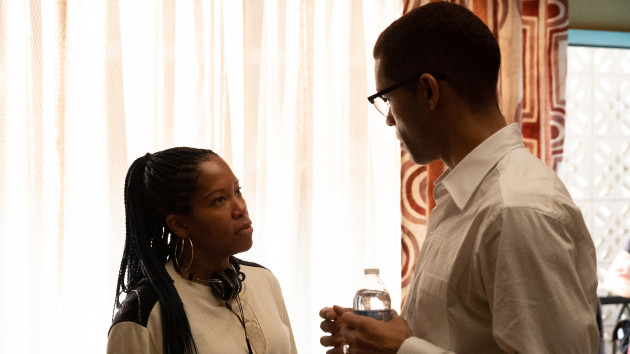 Leslie Odom Jr. didn’t let his nerves get the best of him when he took on the legendary role of Sam Cooke in the Regina King-directed film One Night in Miami.

Based on the stage play by Kemp Powers, the film follows a fictional meeting between Cooke, Malcolm X, John Brown, and Muhammad Ali following the boxer’s win over Sonny Liston in 1964. Odom Jr. tells ABC Audio that he was initially hesitant to take on the influential figure.

“Are you kidding me? I ran from this movie for as long as I possibly could,” he laughs. “I’m just grateful that Regina King saw something in me that I didn’t see in myself.”

“That’s part of the magic of who she is,” Odom Jr. continues. “We were all wrapped up into Regina’s vision of this story on this night and how we could quite possibly be the men for the job.”

Odom Jr.’s co-star Kingsley Ben-Adir, who plays Malcolm X, agrees, adding that his doubts almost got the best of him, until he met with the talented director.

“I just had a tiny moment where I was like, ‘Am I being crazy here?"” Ben-Adir recalls. “Like, ‘Am I setting myself up for a kind of career suicide by the opportunity to get to spend that amount of time with Regina? And [playing] one of the most incredible human beings… as an actor?"”

Odom adds that even though there was “tons of apprehension,” he and the cast were thankful for the opportunity.

“I’m grateful [to] be a part of something so special,” he says.

Report: Beyoncé is going on tour in summer 2023

Nearly 10 years later, Kanye admits Sway did have the answers