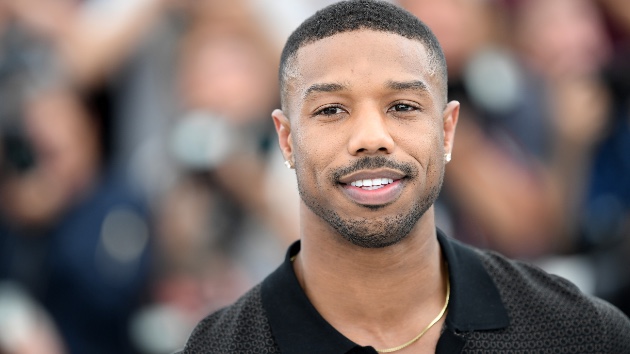 Fans of Jimmy Kimmel Live! were left guessing — literally — over who was this year’s People’s Sexiest Man Alive.  After answering some very specific questions from the audience, Michael B. Jordan dramatically broke the news that he is this year’s winner.

The 33-year-old Black Panther star — who famously caused a teenage fan to shatter her retainer when she clenched her jaw during his shirtless scene — was paraded out at the start of Tuesday’s show disguised in a smiling yellow hazmat suit.

The audience was challenged to figure out the Emmy nominee’s identity by asking him simple yes or no answers to answer.

The best question came from a woman named Tessie, who giggled, “Have you ever been in a romantic relationship with Taylor Swift?”

Jordan’s reply was equally hilarious and he deadpanned in return, “That’s pretty specific, but, no.”

Ultimately, a Los Angeles-based fan named Ashley put the clues together and shrieked with delight as Jordan stepped out of his clever disguise.

As for how the Creed star found out he was crowned People’s Sexiest Man Alive, Jordan revealed to Kimmel that he was in the car with a friend when the announcement came.

“My publicist and my manager gives me a call,” he recalled. “They told me the news and it was a moment like, [bleep,] really? Me?!”

When speaking with People, Jordan called the honor “a cool feeling” but admitted that the women in his family are far more excited about the award than he can ever be.

“When my grandmother was alive, it was something that she collected, and then my mom naturally reads it a lot and my aunts as well. This is one that they’re definitely going to have a special place for,” he grinned.