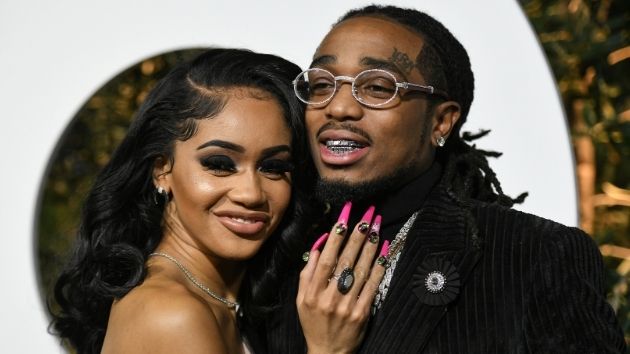 A disturbing video surfaced online Tuesday depicting former couple Quavo and Saweetie engaging in a physical altercation in an elevator.

The video starts with Saweetie — born Diamonté Harper, 27 — slapping the Migos rapper before trying to throw one of his briefcases out of the elevator.

Quavo, 29, then shoves her into the elevator before she can let go of the briefcase and the two fall on top of each other.

While Quavo — real name Quavious Marshall — is able to stand up, his former girlfriend remains on the ground, appearing to rock back and forth.

He makes no motion to help her up and, when glancing down at her, looks directly at the elevator camera.

When the door opens at their level, Quavo picks up his luggage and holds the door open until Saweetie is able to rise to her feet, where she then limps into the hallway.

The video comes a little more than a week after the “Best Friend” rapper claimed her relationship ended because of infidelity.

“I’m single. I’ve endured too much betrayal and hurt behind the scenes for a false narrative to be circulating that degrades my character,” she tweeted on March 19. “Presents don’t band aid scars and the love isn’t real when the intimacy is given to other women.”

When reflecting on her relationship, Saweetie added she “emotionally checked out a long time ago.”

In response to the tweets, Quavo wrote, “I had love for you and disappointed you did all that. You are not the woman I thought you were. I wish you nothing but the best.”

The two had been romantically linked since March 2018 after Quavo famously slid into Saweetie’s DMs with a snowflake emoji.