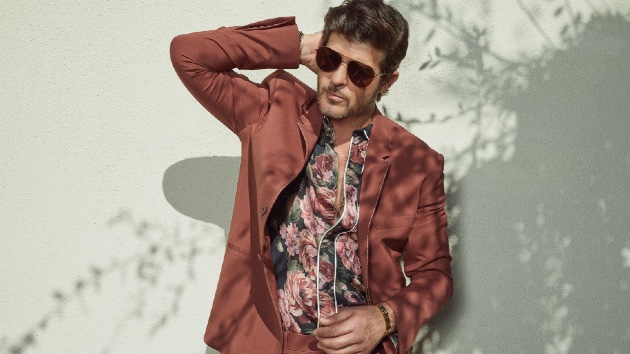 Robin Thicke is looking back at his “Blurred Lines” days with new clarity.  The 43-year-old singer, who recently welcomed a son named Luca with fiancee April Love Geary, says he has come a long way since he burst into the spotlight in 2013.

“In some ways, I’ve never been happier,” Thicke revealed to People. “In many ways, I don’t think I’ve ever been this happy.”

“My marriage to Paula was crumbling.  I started using painkillers,” he confessed. “It was a melting pot of trouble brewing, and I was so arrogant that I thought I could handle it all.”

Thicke’s wife of nine years, Paula Patton, filed for divorce a year later and accused him of drug use, infidelity and physical abuse.

In addition, he and his collaborators were sued by Marvin Gaye‘s estate, who claimed the song infringed on the copyright of Gaye’s 1977 hit “Got to Give It Up.”

Thicke lost the case and was ordered to pay Gaye’s estate $5.3 million.

“Everything seemed to burn down there for a few years… A whirlwind of fame, and overindulgence all coming to a head,” reflected the Grammy nominee. “Fame and a lot of those things — they got to me.”

Then, in 2016, his father Alan Thicke died, which he described as a wake up call.

The Masked Singer judge confessed. “I was in a bad place. I’m happy to have closed that chapter.”

Thicke will chronicle his new outlook in life with his new album On Earth, and in Heaven, which he says “is a testament to all the love in my life and the people who have gotten me here.”