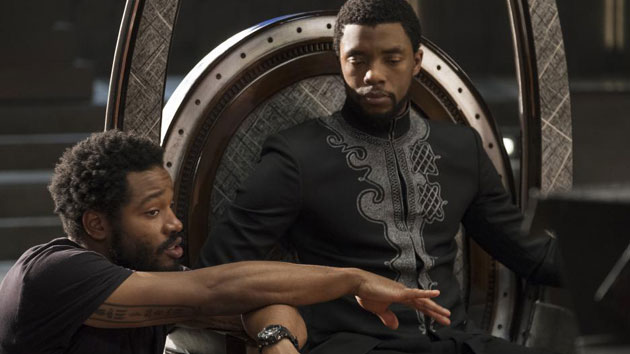 Coogler and Boseman on the set of "Black Panther" -- Marvel Studios

Black Panther director Ryan Coogler has some thoughts about the movie’s sequel, especially about the late Chadwick Boseman.

When speaking with The Hollywood Reporter Wednesday, Coogler expressed that, while it will be hard to continue Black Panther’s legacy without Boseman, he admits that his friend would want the legacy to continue.

“You’ve got to keep going when you lose loved ones,” said the Judas and the Black Messiah producer. “I know Chad wouldn’t have wanted us to stop.”

Coogler took a moment to describe what kind of actor Boseman was and how he influenced the set.

“Black Panther, that was his movie. He was hired to play that role before anybody else was even thought of, before I was hired, before any of the actresses were hired,” he recalled.  “On that set, he was all about everybody else.”

Coogler also touched upon the late actor’s silent battle with stage four colon cancer, saying the diagnosis appeared to be the least of Boseman’s concerns.

“Even though he was going through what he was going through, he was checking in on them, making sure they were good.  If we cut his coverage, he would stick around and read lines off camera [to help other actors with their performances]… So it would be harder for me to stop,” the Oscar nominee furthered. “Truthfully. I’d feel him yelling at me, like, ‘What are you doing?’ So you keep going.”

“I miss him in every way that you could miss somebody, as a friend, as a collaborator. And it sucks because I love watching movies, and I don’t get to watch the next thing he would have made,” he reflected.

Black Panther 2 is slated to start production in July and hit theaters in 2022.