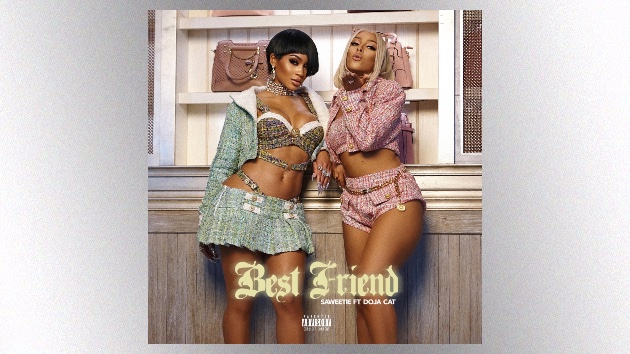 Saweetie and Doja Cat are proof that there is no better hype than your “Best Friend.”

On Thursday, the two rising stars dropped their empowering anthem “Best Friend” — and the eclectic music video match — which is all about hyping up your bestie.

Over the catchy beat, Saweetie and Doja take turns highlighting each other’s success, beauty, and independence.

“That’s my best friend, she a real bad [chick] / Drive her own car, she don’t need no Lyft,” Saweetie raps during the chorus. Doja Cat brings that same energy in her verse rapping, “If she ride for me, she don’t need a key.”

Not only do the lyrics capture the epitome of a close-knit friendship, the visuals convey the same message as well.

The Dave Meyers-directed music video starts out with the ladies peacefully lounging out in the sun, when they are approached by a man. As he is talking, the two begin having a full-blown conversation by simply giving each other looks, like only true best friends could, before dismissing the man.

Cut to the ladies all dolled up, having a blast in various scenarios from throwing money in the air at a strip club, goofing off while at a sleepover, and hanging out by the pool, to Saweetie twerking on the hood of blinged-out Tesla as Doja Cat drives with her head hanging out of the window.

“Best Friend” is just the latest collaboration anthem from Saweetie, who is gearing up for the release of her debut album, Pretty B*tch Music. She previously released “Back To The Streets”, which featured vocals from Jhené Aiko, and, over the summer, she dropped the remix for “Tap In” with DaBaby, Post Malone, and Jack Harlow.

Watch Michael B. Jordan enact revenge in ‘Without Remorse’; Octavia Spencer and Melissa McCarthy get super-powered in ‘Thunder Force’