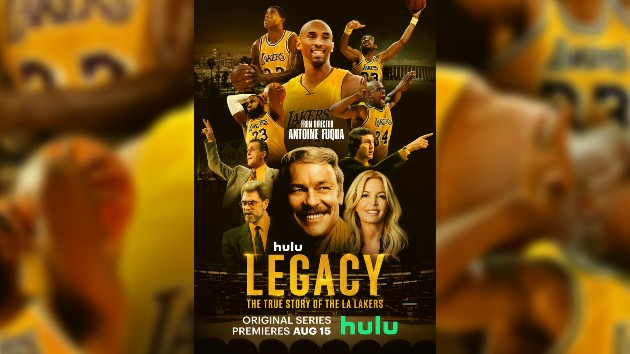 Want to know the real story of how the Lakers became the Showtime Lakers? Then the new docuseries Legacy: The True Story of the LA Lakers is for you.

The Hulu series, debuting Monday, details how Dr. Jerry Buss bought the team in the late ’70s and created one of the greatest dynasties in sports. NBA legend Kareem Abdul-Jabbar is featured in the show, and he tells ABC Audio the secret to their success was that they “kept trying to build a family situation.”

“We never got to a point where it was develop an individual,” he explains. “It was always about all of us. And we tried to help each other.”

Abdul-Jabbar adds that this docuseries is kind of an antidote to the recent HBO series Winning Time: The Rise of the Lakers Dynasty, which has been criticized by many former players for alleged inaccuracies.

“It’s a chance for us to tell our stories…There’s no fiction in this,” Abdul-Jabbar says.

Legacy also gets into the power struggle among Buss’s children that came after he died, which his daughter, and current Lakers president, Jeanie Buss, says was “very healing” for their family.

Additionally, the series shows how the Lakers family, fans included, bonded after several tragedies like “Magic [Johnson] having to retire because of HIV” and “the tragedy of losing Kobe and Gigi [Bryant].”

“What’s happened is Laker Nation comes together and leans on each other,” Buss shares. “And we know there’s going to be another day…where we play basketball again. And that’s how we start to heal because we grieve together.”

“It’s the American dream. I think what Dr. Buss did is incredible…coming from very humble means and making his way out here…and what he brought to not only Los Angeles, to sports entertainment. Just it’s inspiring.”