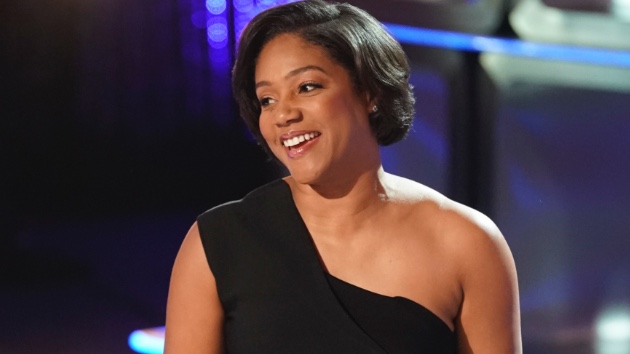 The silhouette challenge is taking over social media and stars Tiffany Haddish and Common have raised the bar with their steamy yet comedic take on the latest internet bandwagon.

The silhouette challenge is exactly as it sounds, with people setting their lighting so that only their outline can be seen while they dance sensually to slow music.

Haddish, 41, starts off her video by wearing a cap, hoop earrings and a red jacket while grooving to Paul Anka‘s “Put Your Head On My Shoulder” before switching the mood — and lights — to something much more fitting for Valentine’s Day.

The Girls Trip star starts blasting Doja Cat‘s “Streets” as she proudly flashes her newly toned body while rocking a little black number as she bathes her silhouette in steamy red light.

Her boyfriend, Common, then crashes her party of one by ensnaring her in a passionate kiss.  The two enjoy a little PDA before kicking things up a notch.

But, instead of choosing an ultra-romantic ending, the two pull a complete 180 when the “Testify” rapper accidentally knocks Haddish’s wig off her head.

Common reacts in shock and dismay as he looks apologetically between the wig in his hand and at Haddish’s shaved head before tossing it on the ground like a hot potato.

As for Haddish, she shrugs nonchalantly in response and throws her head back in laughter before the video abruptly ends.

“For the Lovers,” the Night School star cracked in the caption.

Famous friends, including Erykah Badu and Estelle, couldn’t help but laugh at the video’s comedic twist and flooded the comment section with crying laughing, fire and heart emojis.

Haddish and Common first sparked relationship rumors in 2019 and later went official in April 2020 when confirming that they had been quarantining together.