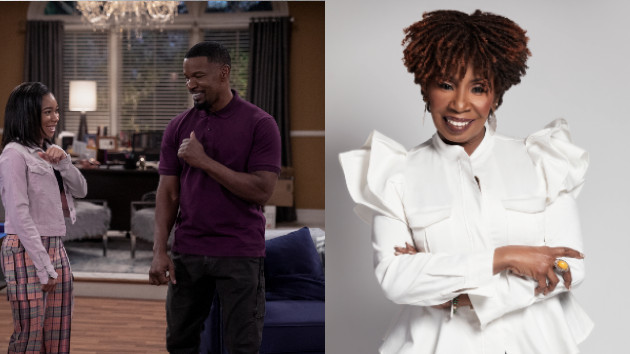 Jamie Foxx has reunited with his In Living Color cast mate David Allen Grier in the official trailer for Netflix’s new sitcom, Dad Stop Embarrassing Me!

Inspired by Foxx’s relationship with his daughter, Corrine Foxx, the show follows the Oscar winner as Brian Dixon, a successful business owner and bachelor who just became a full-time dad to his teenage daughter Sasha, played by Kyla-Drew.

Meanwhile, Foxx is gearing up for another major project. Deadline reports the comedian will star alongside Nikolaj Coster-Waldau, January Jones, Maika Monroe and Andrew Dice Clay in the forthcoming action-thriller God Is a Bullet.

Based on the novel of the same name by Boston Teran, the film follow Coster-Waldau as vice detective Bob Hightower, a man who finds his ex-wife murdered and daughter kidnapped by a satanic cult. Angered by the botched investigations, Hightower quits the force to infiltrate the cult.

Deadline reports Foxx will play the “pivotal supporting role of The Ferryman.” Pre-production will begin on May 24.

In other news, OWN has decided to end one of their beloved series. After 10 years on TV, the eighth season of Iyanla: Fix My Life will be its last.

New episodes of the show will begin airing on Saturday, April 10 at 9 p.m. It will then have a special two-hour farewell episode Saturday, May 22 that will include Fix My Life‘s most memorable moments.

Tyrese Gibson’s in no rush to drop new music: “Other than Jesus…my main source of income is movies”