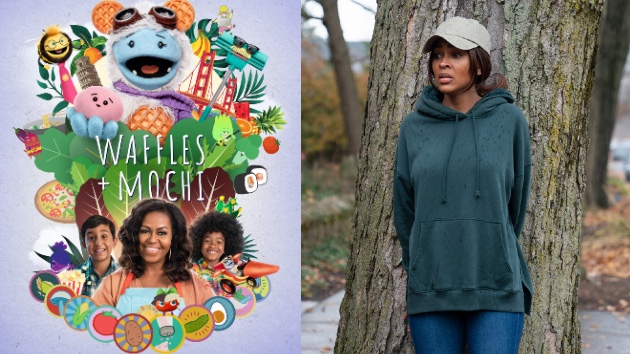 “If you want to be a great chef, you have to learn about all kinds of different foods,” says former first lady Michelle Obama in the trailer for her new Netflix series, Waffles + Mochi, arriving March 16th.

Obama, who’ also executive producer, will assist her two puppets friends as they travel the world and learn how to cook various foods from different cultures.

According to the trailer, Waffles and Mochi travel to Japan, Peru, Italy and other destinations, while running into special guests such as The Hangover’s Zach Galifianakis, rapper Common, and more.

Ahead of Obama’s new show is Meagan Good‘s lead role in Lifetime’s upcoming film, Death Saved My Life, also starring her sister, La’Myia Good. Good plays Jade, a mom and wife who is dearly respected in the community. But even after 10 years of marriage, things are not as good as they seem.

Chiké Okonkwo plays Ed, Jade’s physically and psychologically abusive husband. After Ed’s hitman failed to kill her, Jade believes the only way to completely escape from Ed is to fake her own death. “I’d rather die than be with you,” says Jade to her husband in a clip.

And speaking of trailblazers, gymnast Simone Biles has inspired the new Facebook Watch Original docuseries, Simone vs Herself, which takes an inside look into the life of the four-time gold Olympic medalist and 19-time World Champion.

According to a press release, Simone vs Herself airs this summer and details Biles’ battles with “adjusting to a postponed Olympics [and] conquering the challenges that come with success and the weight of enormous expectations.”

Megan Thee Stallion and Pardi reveal cute nicknames for each other